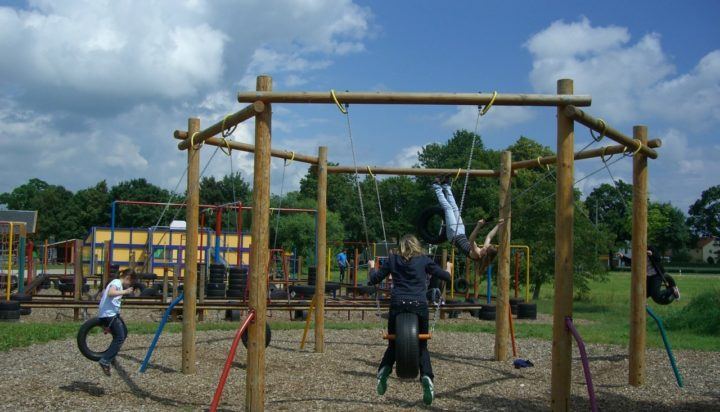 As you may know, the government has banned, or “outlawed,” much of the old-style playground equipment that we might have seen as a great deal of fun when we were children. And they were fun; the problem, however, is that many of them were – and remain – dangerous. The number of children badly injured on old-school playgrounds every year is staggering. We know that you, like us, don’t want your child being among those statistics. So, let’s take a quick tour of the most dangerous of old-style playground equipment.

As you know, untreated wood absorbs water and over time, tends to rot, weaken, and become unsafe. The solution to this was “pressure-treated” wood. Like the name implies, the wood was subjected to high pressures, to compact it and drive out air and moisture. However, at the same time, the wood was subjected to a pressurized infusion of a Chromated copper arsenate (CCA) which contains arsenic but aided in rot prevention. Since 2003, CCA treated wood is no longer processed for use in playground equipment.

Real Tire Swings were a lot of fun; However, they had some problems that took time to show up. Untreated (non-coated) tires can grow and accumulate dangerous mold. Also, if the tire is hung vertically, it will collect water, which is an ideal breeding ground for disease-bearing insects such as mosquitos. We now recommend a horizontally-hung, coated tire, with drainage holes in the underside of the tire.  There are colorful and safe plastic tires manufactured specifically for playground use.

Animal swings were swing seats that were extremely heavy and hard that were molded into the shape of a variety of animals.  these swings were so dangerous that the Consumer Product Safety Commission ordered them to be removed from all public playgrounds in 1995.

What could be dangerous about a simple slide? Two words: hot metal. Metal slide surfaces heat up to dangerous levels when exposed to the hot sun for long periods of time. Children using them can develop first and second-degree burns while sliding down.  When installing a slide, consideration should be given to shade from either trees or a shade unit as well as warning signs regarding temperature hazards at the site.

These were tons of fun. The objective was to load up the horizontal platform with as many kids as possible, get it spinning really, really fast, and hold on for dear life. Literally. The goal was to be the last boy or girl standing, so to speak. The problem was that all the other children literally flew off the platform due to centrifugal force.  New government guidelines require the manufacturer to have a limit to the peripheral speed.

Tetherball was a tall pole with a rope attached to the top with a ball on the other end of the rope. The objective was for a group of children to swat that ball and get it moving, flying around the pole as fast as possible. Zip lines are just like they are today: a metal cord attached to two fixed ends, with an apparatus (horizontal metal bar) hanging from it. The objective was to grab that bar, hang on for dear life, and zip down that line to the other end as fast as possible.  Tetherballs and Zip Lines are now restricted to be used by children ages 5-12 years.

Trapeze or D-Rings were similar to the zip line, in that the objective was to get from one ending post to the other ending post, but instead of a metal cord, there were a series of metal rings. Kids would swing from one ring to the next, as fast as possible. these are also only appropriate for children ages 5-12 years.

Call us to learn more. Check out our recent playground projects in NJ and NY areas.